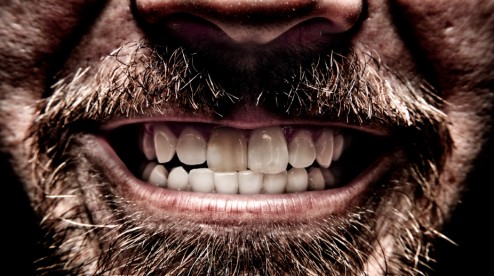 Gather round, children. I want to tell you a scary story. It’s the true story of a tooth. It was a tooth that was long thought to be dead. You see, the owner of this tooth was a 60+ year old man who had bumped it on a manure spreader when he was nine. Over the years, the tooth went dark. It never really hurt him, it just changed color. He got used to it over the years and just thought it was dead.

Then it happened. One dark and rainy night, some 50 years later, something changed about that tooth. He started to notice some feeling in that tooth. Some pressure. It felt different. It didn’t hurt, exactly. But something was different. He went to bed thinking it would go away.

He was awakened from a dead sleep with a sharp pain under his lip. The pain was intense and throbbing. It hurt so bad, he was ready to try and take that tooth out with his bare hands. And his dentist’s office didn’t open for another 4 hours! It was like a horror movie that had come true. The tooth he always thought was dead…had come back to life! And it was haunting him!

Have you ever seen someone with a dark front tooth? It’s relatively common in adults and very common in children. Most often it happens after some kind of trauma. Like a kid that bumps their front tooth on a coffee table or a guy to gets hit in the face with a softball. Sometimes these teeth turn dark. The dark color is actually an indication of the pulp of the tooth becoming necrotic. Necrotic is a fancy term for tissue death. So what we’re really talking about is a dead tooth.

Necrotic teeth usually become abscessed teeth. An abscess happens when the immune system’s response to the trauma is so heavy that pus actually leaks out of the gum tissues! Although most people are grossed out by talk of pus, it’s pretty important. Pus is simply the dead cells that our immune system uses to cause inflammation, which is a response to infection or a foreign body. Often the teeth do become infected but if the injury is only from trauma, sometimes there isn’t true bacterial invasion in these teeth.

A tooth that has become necrotic needs treatment. It either needs to be removed or it will need root canal therapy. When these teeth aren’t treated, they usually stay chronically inflamed. This chronic inflammation often doesn’t hurt, but it’s almost always doing damage to the surrounding tissues. An untreated tooth with this kind of injury has the potential to become a zombie tooth. 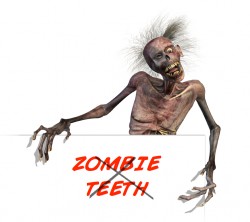 Zombie teeth are dead and chronically inflamed. They almost never hurt…until they do! It’s like a classic slasher movie. Everyone is relieved when they think Jason or Freddy is dead. But they always come back to life!

Do yourself a favor…if you’ve got a zombie tooth make sure you get in to see your dentist! These teeth have a way of not being a problem until holidays and weekends!

Did you find this post horrifying? Did it scare you to death? I’d love to hear about it! You can share any Mead Family Dental post with a “Like” on Facebook, a “+1″ on Google+ or you can even “Tweet” it with Twitter! All you need to do is hover over the heart shaped button next to the title of the post. Or you can leave a comment by clicking on the balloon shaped icon next to the title.