Skip to content
Home/gum disease, medicine and dentistry, Uncategorized/How is gum disease like the Incredible Hulk?
Previous Next 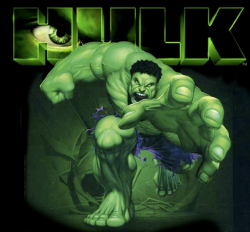 “I never pictured gum disease being this GREEN before.”

Most everyone knows about the Incredible Hulk. Mild mannered scientist Bruce Banner was accidentally exposed to deadly gamma rays, but instead of killing him the radiation gave him strange super powers. When he gets injured or angry, he turns into a gigantic, green, immensely strong and almost mindless rage monster. And the angrier he gets, the stronger he gets! Chaos ensues with him attacking and smashing anyone and anything that gets in his way. Cars are thrown, buildings are brought down and cities are often leveled. He only stops smashing things when his fury burns out, he calms down and he turns back into the mild mannered scientist again, wondering what he’s done this time.

The Hulk was one of my favorites when I was growing up. Reading through my comics I would cringe at the stupid bad guys, thinking “dude, you’re making him angry!” So how, exactly, is a comic book antihero similar to gum disease? Stay with me on this one…

Let’s start with the immune system. Your body is constantly being invaded by viruses (think cold season), bacteria and lots of other nasties that you can’t even see. Lucky for you, your immune system is constantly on the lookout and mostly takes care of these attacks without you ever being aware of them.

Inflammation is usually a good thing and can be the first step in healing an injury or an infection. However, too much of this inflammatory response can actually cause damage to the tissues that the immune system is trying to protect!

Gum disease is primarily a problem with inflammation. It’s actually an inflammatory reaction to biofilm on your teeth and below your gums. The plaque and debris that we try to brush and floss off of our teeth is pretty sticky stuff. It doesn’t really want to be removed. And if it’s left there long enough, it will harden. This hardened plaque is called calculus or tartar. This calculus acts kind of like a barnacle stuck to the surface of your teeth. Worse than that, it usually gets stuck below the gum line. It’s just about impossible for you to remove by yourself. To remove it a dentist or dental hygienist has to use special tools to break it loose from the surface of your teeth.

“Don’t make me angry. You wouldn’t like me when I’m angry.”

So imagine this calculus on the surface of the roots of your tooth like a bunch of tiny slivers. Your innate immune system recognizes it as a bad guy, but cannot remove it. This makes the innate immune system mad. Kind of like when Bruce Banner gets mad. And the madder your innate immune system gets, the stronger the reaction it creates to try and remove this invader. It starts dumping the toxic chemicals it uses to kill bad bacteria and other bugs into the tissues supporting your teeth! These chemicals, along with toxins from the biofilm itself, start to break down the tissues that support your teeth. It’s kind of like you have an angry Hulk smashing around in your gum tissues, but he’s not able to get rid of the bad guys. And this makes him really angry! So instead, he starts attacking YOU!

In the comic books the Hulk only stops his rampage when he calms down. And this goes for your inflammatory response as well. The very best way to calm our “periodontal Hulk” is to remove the junk stuck to the roots of the teeth. If we can remove this stuff, we can usually calm down that response and stop the active destruction of your gums. Just like the end of every Hulk comic, there’s often a lot of destruction to clean up after the Hulk is gone. Many patients have to deal with the severe loss of bone and the supporting tissues of the teeth even after we’ve cleared up the inflammation of active gum disease.

So, what’s the best way to prevent Bruce Banner from turning into the Hulk? Prevention! Don’t make him mad, right? Brushing, flossing and regular visits to the dentist can help you avoid the ravages of gum disease. Catching problems before they become destructive is the best, but even if you have gum disease, it’s not too late to treat it!

Did you find this post incredible? Did it make you angry? I’d love to hear about it! You can share any Mead Family Dental post with a “Like” on Facebook, a “+1″ on Google+ or you can even “Tweet” it with Twitter! All you need to do is hover over the heart shaped button next to the title of the post. Or you can leave a comment by clicking on the balloon shaped icon next to the title.