Skip to content
Home/Xylitol/Sweet! (or why do you talk about xylitol so much?)
Previous Next

Sweet! (or why do you talk about xylitol so much?)

It's true.  I'm pretty excited about Xylitol.  So why would an artificial sweetener be so exciting to me?

Because it's sugar that prevents cavities!  For real!  Seriously, how cool is that?

"No way," you say.  "Can't happen.  Sugar causes cavities.  That's why I'm supposed to feel ashamed when I eat Whoppers."

Xylitol is actually a "sugar alcohol."  It's a naturally occuring chemical that has a sweetness identical to table sugar, so it's a pretty good sweetener in foods.  But the coolest thing about sugar alcohols…they can't be digested into acid by mouth bacteria.1,2  The best description I've heard about what xylitol does to oral bacteria goes kind of like this…

Not a bad deal, right? 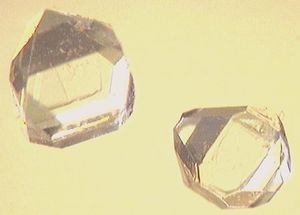 Xylitol has a couple down sides.  First, it isn't calorie free.  We often think of artificial sweeteners as having no calories (think Nutrasweet, Splenda).  Xylitol has equivalent sweetness to table sugar but it's got roughly half the calories of it.  So not bad, but not perfect.  The other thing…sugar alcohols in high amounts can cause diarrhea.  It's not because your sick but because chemically they draw water out of the large intestine.  A lot of dietary candies (Atkins' diet candy in particular) are sweetened with sugar alcohols and you really need to watch your intake.  Not fun.

The other down side is that xylitol is a pretty expensive ingredient.  It's cheaper to use other artificial sweeteners for sugarless items.  So you kind of have to look for it.  I'll often use Google or Amazon.com to point out which gums or candies are flavored with xylitol.

So, check out some xylitol.  Maybe you'll become as excited about it as I am!  Or maybe not.

Questions or comments?  Would you like to make an appointment with Saginaw's premiere blogging dentist? (me…that's me!)  Feel free to call the office at (989) 799-9133 or email me at alan@meadfamilydental.com.  I always answer my own emails!