Acid reflux and the dentist

“How would your dentist know that you have acid reflux?” asked the physician.

Actually it was physicians.  I heard back from two patients this week who went ahead and told their physician that their dentist strongly suspects that they have acid reflux or GERD (gastroesophageal reflux disease).

One patient told me about the esophageal endoscope procedure he had.  Good times!  Actually, not to make light of the situation but the scope showed positive findings for acid induced damage of his esophagus. This kind of damage can lead to esophageal cancer.  His doctor put him on two different medications and recommended a serious diet change.

The second patient told me about the testing he went through.  Apparently there is some kind of barium  x-ray that can be taken that shows places in the esophagus and stomach affected by acid reflux.  He was also put on medication.  He told me today that if he misses his medication it makes for a long and painful day from heartburn.

So what’s my secret?  Do I have mystical powers?  Am I psychic?  How can a simple dentist know about medical problems in the stomach and esophagus?

As disappointing as it might be, it’s a relatively simple observation and some health history questions. As I’ve mentioned before, acid affects teeth.  If you put teeth in an acidic solution for a long enough time it’s going to destroy some tooth structure.

Simply stated, acid reflux is a leaky valve at the top of the stomach that lets digestive acid leak out into the esophagus.  This acid can actually make it’s way all the way back up into the mouth.  Symptoms of acid reflux include:

The damage that acid reflux does to teeth appears a bit differently than a regular cavity.  First, is the location. 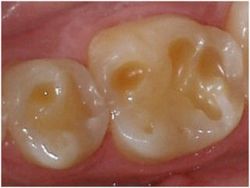 It’s almost always on lower molars, which are the closest to the esophageal opening.  Secondly, the damage is rarely in between teeth, but on the biting surface of these molars.  It appears as pitting on or near the tips of the cusps (bite surface bumps) of the molars.  Affected teeth have a dull and smooth surface with a loss of gloss.  Tooth decay from oral bacteria tends to be more localized and more often found in the bite surface grooves or in between teeth than cusp tips.

When you look at teeth all day long, this pattern becomes very noticeable.  I mention it to each patient that I see it on and recommend that they have it evaluated by a physician.  The problem is that up to 25% of people with gastric reflux have “silent GERD” and have no noticeable symptoms.

That’s where I come in! 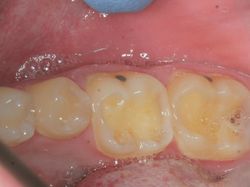 I’ve you’ve got reflux with no symptoms it’s pretty likely that you’ll have some evidence on your teeth.  Unfortunately, sometimes the tooth destruction can get pretty advanced before we catch it when the patient doesn’t have any other symptoms.   This patient has eroded all of the enamel off the biting surfaces of the molar teeth yet the premolar teeth in front are relatively unaffected.

The bottom line is that dentists can sometimes be the first line of treatment for GERD.  If you have any of the symptoms listed above or just wonder if you might have gastric reflux troubles I’m happy to help.  Give us a call at (989) 799-9133 or email me at alan@meadfamilydental.com.  I’d be happy to take a look!