Skip to content
Home/prevention, Science, taking care of your teeth/#Istandwithfloss
Previous Next

Recently the Associated Press dropped this bombshell about a practice that every dentist and hygienist has been recommending forever…flossing. The AP states:

It’s one of the most universal recommendations in all of public health: Floss daily to prevent gum disease and cavities. 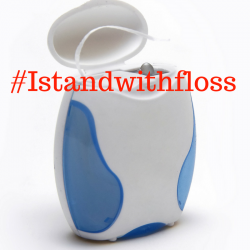 If you take a look at the research base, they’re right to have caved. The best studies on flossing that they have are not convincing. They kind of had to remove the recommendation to be consistent with their standards. I understand what they did and cannot fault them.

Here’s the thing…there will be no rush to research flossing. The research design would be difficult and expensive and I doubt that there is the will for it.

I can hear what you’re thinking: “Mead, you claim to be interested in evidence and science! How can you possibly recommend flossing to patients if the federal government retracted their recommendation! The science says it’s no better than brushing alone!”

Let me explain myself.

Everyone’s teeth are covered with a layer of gunk called biofilm. It doesn’t matter how well you brush them and floss them, they’ve got biofilm on them. When dentists and hygienists accuse you of not taking care of your teeth they call this biofilm “plaque” and they get all bent out of shape that you have lots of it on your teeth. We’ve been instructing patients to do their very best to remove this plaque from their teeth for as long as we’ve been in the profession.

The goal is to remove as much of the biofilm as you can.

So you brush. And that can remove a lot of the biofilm. But there are places your toothbrush can’t get to. What is a person to do? The research says flossing doesn’t work.

So I guess you should just leave that gunk sitting in between your teeth, right?

Do me a quick favor. Grab a long piece of floss and wrap it around your fingers. Slide that floss in between a few pairs of teeth, wrap it in a “c-shape” and gently stroke up and down. Then take that floss out and take a good hard look at it. Is it clean as a whistle or does it have a bunch of gunk on it?

If you’re like virtually every patient I’ve seen, it will have a little gunk on it.

The problem is the research, not the flossing. Maybe the design of the studies hasn’t been adequate. That’s a huge problem in medical research. Often times we think we’re measuring one thing when we’re not measuring that at all. You’ll notice that the evidence hasn’t recommended against flossing either. Flossing has been an accepted recommendation by dentists and hygienists for so long that it is no longer a hotbed of research inquiry.

Getting back to what a dentist or hygienist should recommend to patients: if our goal is to remove as much biofilm from our teeth and gums as possible, flossing does that. I don’t actually need peer reviewed research to observe that.

There is a word that I really like. That word is “plausible.” Plausible is defined as:

(of an argument or statement) seeming reasonable or probable.

The idea that flossing helps remove biofilm, which in turn helps reduce a person’s risk for cavities and gum disease is plausible. An idea that is plausible, even if it doesn’t have tons of great evidence, is worth keeping around.

Flossing is not expensive nor is it risky. It observably removes biofilm from in between the teeth that brushing cannot always get. And even though our current level of evidence does not allow the federal government to recommend flossing, it is still likely a worthwhile effort.

Did this make you feel plausible? Do you feel like flossing? I’d love to hear about it! You can share any Mead Family Dental post with a “Like” on Facebook, a “+1″ on Google+ or you can even “Tweet” it with Twitter! All you need to do is hover over the heart shaped button next to the title of the post. Or you can leave a comment by clicking on the balloon shaped icon next to the title.