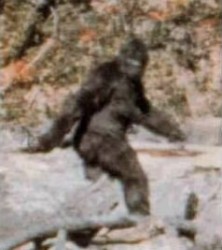 Note the swollen jaw and poor attitude towards preventive dentistry

Sasquatch sitings in central Michigan are rare. Particularly in the Saginaw Valley. Saginaw hasn’t had any reported sitings of the ape-like cryptid since 1937. However, that’s not to say they aren’t around. As recently as 1977 they’ve been reported in the thumb, so I never doubted that they were around.

I’ve always taken a special interest in sasquatches due to their love of sweets. Anyone with even a passing interest in cryptozoology knows that a bigfoot won’t pass up a chance to gorge on honey or other sugary treats. So it’s no wonder they suffer from toothaches. The team here at Mead Family Dental have let it be known that we’re happy to see any creatures suffering with toothaches, and apparently word gets around. 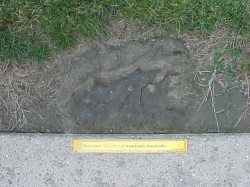 On December 13, 2011 we found what we’re pretty sure is a sasquatch print. We figure that the poor ‘squatch had a toothache and caught us on a Thursday afternoon after we’d left for the week. Since most sasquatches don’t have smartphones (poor reception in the wooded and mountainous areas they inhabit) he wasn’t able to call the emergency number at (989) 488-7665. I feel bad about that. I hope this poor bigfoot knows that we’re happy to see him and take care of any of his dental needs if he’ll just drop us a line. Maybe he’d prefer to make an appointment online. I’m not sure.

We went ahead an made a cast of his footprint. We’ve got plenty of dental stone and we wanted to let people know about sasquatches and their dental problems. So, we’ll have the cast of this poor suffering bigfoot available to look at all April long. Drop by to take a look. I think you’ll be impressed.

Unfortunately, we haven’t heard from him yeti.